Some exclusive features of Revit 2015 to improve your Revit workflow"

How I Build a Space Station in Revit Architecture

ARCHICAD 22 is launched by GRAPHISOFT

GRAPHISOFT has introduced ARCHICAD 22, the updated version of ARCHICAD building information management (BIM) software. Given below, some exclusive features of it.

Better Facades: The Curtain Wall tool is entirely redesigned and transformed to a real design tool rather from just a modeling tool.

The new Curtain Wall tool contains an interactive preview, where it is possible to arrange your required facade design with frames and watch it appear on the wall. If it is required to employ a repeating pattern, the pattern can be produced in the preview tool, and can be selected how many times you want it to repeat on each wall. If you prefer to apply the similar facade patterns among projects are required, you can arrange the design in your Favorites folder, where it is easily accessible. To deal with more complex facade design, the frame tool can be applied to sketch or trace a pattern, then utilize it just as you would a regular frame.

One can also obtain 3D shapes and structures as part of your facade, and formed with standard "smart frames" that automatically modify their borders when it is required to cut or relate panels.

The Rhino-Grasshopper Connection: The Curtain Wall tool also performs in collaboration with Rhino's Grasshopper tool, a visual programming environment that facilitates you to produce generative algorithms.

Practically, it signifies that one can generate patterns that function in the background of your facade pattern, like making the pattern tiles smaller on one part of the facade than on another or making organic shapes within your patterns. It also facilitates you to import photos or images as a pattern, in spite of drawing the pattern freehand directly in the curtain wall tool.

Parametric Building Components: In ARCHICAD 22, the parametric standard elements and non-parametric custom profiles are merged to create intelligent profiles for elements as well as manage their shapes and sizes and their cross-section through BIM parameters. It allows you to model various components (e.g., one column or beam that has to be slightly longer) with the equivalent profile. The auto text label that is created will automatically modify on the basis of which components it is dragged to.

The new Expression Defined Properties capability facilitates the users to acquire more organized information from the model devoid of too much manual work. The new capability allows you to utilize any information accessible in the project (e.g., number of rooms, floor area, wall height) in custom expressions to answer questions like “How many boxes of tiling do we need for the floor?"

The product of these expressions is also utilized in other expressions. As for instance, you wanted to know the cost of those tiles, you could plug your first expression into a second expression.

BIMx's Hyper-model is a suitable way for integrated 2D and 3D building project navigation. But, in earlier version, it could only be seen on a mobile device. This version contains a web viewer that facilitates you to navigate and explore the building from a browser. It allows access to the complete Hyper-model, as well as an auto play mode is included that flows automatically through saved favorite views of the building. To end with, these BIMx walk-through videos are implanted into a website, facilitating the architects to generate online portfolios which comprise of 3D project images.

The pick point Hatch tool is also revamped with the facility to indicate an error margin in gaps to be filled.

To be familiar with more features of TurboCAD 2018, click on the following link turbocad.com 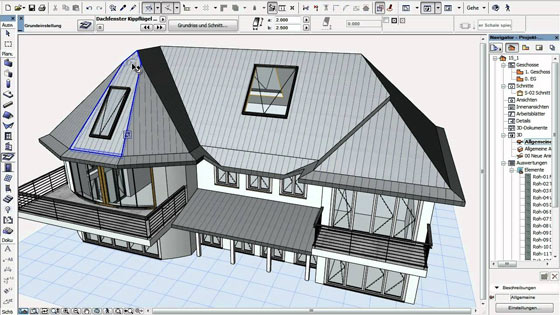