Autodesk BIM 360 Docs is updated with a significant extension by introducing a mobile app for Android-based smartphones and tablets. With this new app, the users will be able to use BIM 360 Docs functionality to Android-based smartphones and tablets. The users can apply both apps at free of cost. BIM 360 Docs comes with a paid subscription tier and a free tier; the later offers access to a single project, with some restricted features.

BIM 360 Docs stands for a web service for managing construction document efficiently. BIM 360 Docs was developed to get rid of those issues by delivering a “single source of truth” for projects and facilitating the users to perform the following:

• Upload all documents, plans, and models to one storage
• Allocate files with controls that restrict entry to specific users and permission levels, sustain version control, and track changes
• View 2D and 3D files
• Markup files and distribute those markups with other users.

The new Android app utilizes the customary Android [user interface]” and offers entry to all of the user’s BIM 360 Docs projects. The app offers the following exclusive features:

• Top-notch folder navigation, and sub-folder views
• Thumbnail views of files with visual indicators of versions
• A single viewer for 2D plans and other file types like photos
• Complete navigation tools for 3D models along with object properties
• Markup panel to observe all the comments related to a plan or model
• Issue list for 2D plans
• Capability to modify the status of an issue. 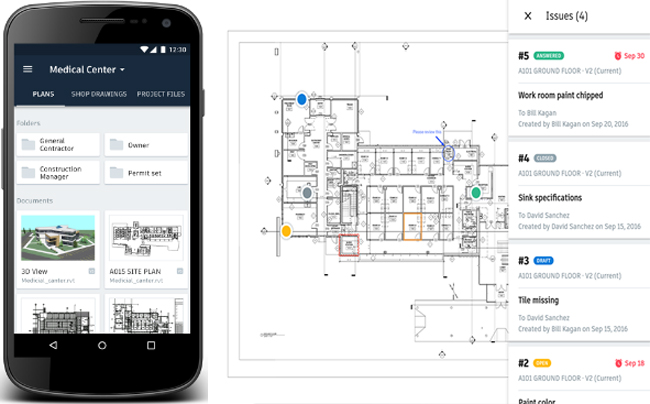