How to create parametric walkway in Revit

In this revit video tutorial, you will be familiar with the necessary steps to model a parametric walkway (twisted looking structure with triangular grid) in Revit.

It begins like a conceptual mass family. You will learn the methods essential for creating model of a spline with triangular profiles at various angles as well as transform it into a form.

Then you will gather knowledge on how to create the model of a curtain panel based family and load it into the mass. Finally, you will learn how the mass is loaded into the project with the addition of a concrete strip at the floor level.

The file is available in the following folder:
%ALLUSERSPROFILE%\Autodesk\

The conceptual design environment opens. The Forms tool and other tools are applied to generate the mass.

In the tutorial, the following shortcuts are used to accelerate the speed of the work.

To view the complete processes, go through the following revit tutorial. 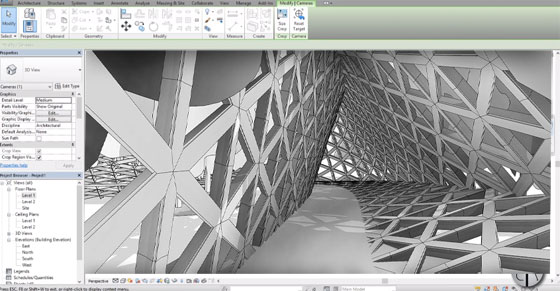