Evolution of AutoCAD Over the Years - Specs and Features

AutoCAD has been an invaluable digital design tool from the last century. You can probably still find some of the ancient versions somewhere around the web. Today, we will see how AutoCAD has developed over the years in terms of system requirement and features added.

AutoCAD 2000: This is the oldest version of AutoCAD still going. It ran on Windows 98 through XP, and required no more than a Pentium III to process. It occupied only 64 mb of memory, can you believe that? You could install it in just 300 mb disk space.

Autodesk had released a minor upgrade, the AutoCAD 2000i later. The support for both ended in 2005. AutoCAD 2002 was released with some changes, not much to see here.

AutoCAD 2004: This is the time when AutoCAD became really, really popular. There wasn't much competition for it back then, and it did what it did awesomely. AutoCAD 2004 was the first to support saving and loading 3D solids via Autodesk Shape Manager. Also, they started the modeless dialog box with easy access to the tool palette.

For the system requirements part it was not much different from the previous versions except that it couldn't run on Windows 98.

This naturally increased the memory requirements of AutoCAD 2005 over the previous versions. Now you'd have needed 256 megabytes of RAM at least. Also, the processor had to be of 800 MHz or better - still P3 though.

AutoCAD 2006: Demanding no extra power than its predecessor, AutoCAD 2006 concentrated on data portability. You can now extract the design data directly onto a table. Also, the wizard enabled the users to preview, sort and reorder the data easily.

AutoCAD 2007: With a sleek new interface design, AutoCAD 2007 was much heavier in resources needed. Now the user had to have 512 mb RAM, Pentium IV processor, and nearly a quarter of a gigabyte of space on the hard disk free to install and run this software.

All that was worth it, though. AutoCAD 2007 carried a new dashboard-like UI, enabling users much easier access to regularly used tools and options. Furthermore, the rendering and styling capability was increased many times with shadows, overhanging lines, transparency effects and silhouette edges and more. This let the models have a more 'hand-drawn' look.

AutoCAD 2008: The Autodesk team got very serious while releasing this version. They focused entirely upon the 2D drafting capabilities of the individual user, incorporating 35 changes and new features. They had taken guidance from the customers to enhance the capabilities of the system. Amazingly though, it required no more resources than its predecessor.

AutoCAD 2009: This was mostly a gimmicky release, with no impactful changes. They just updated the user interface to suit the new Windows Vista, adding the ribbon concept. Also, a quick access toolbar made things a bit more handy.

Unsurprisingly it would run the best on Windows Vista, however AutoCAD 2007 still supported XP, with the service pack 2. As did Vista, it also required a dual-core processor of 2 GHz or faster, and 2 GB RAM in Vista (1 GB in XPsp2).

AutoCAD 2010: This version concentrated on creating better solids. With smoother meshes and free-form design tools, users were able to create more organic-looking solids. Naturally this required more processing power. On Vista SP1, they needed a 3GHz or faster processor with SSE2, and 2 GB RAM. The software was heavier as well, taking up 1.5 GBs of space.

AutoCAD 2011: This was the first version of AutoCAD to run on Windows 7. Besides, it came with a better interface, lots of fun new 2D & 3D tools, and some abilities to streamline the design process. This cost the users 2 gigs of disk space only - and they did recommend to run AutoCAD 2011 only on a 64-bit system.

AutoCAD 2012: It focused more on online features and brought a whole new array of them. Also, a better snap mode and a new picauto setting helped a lot. Other than a good internet access for the AutoCAD WS Online Storage support, it didn't really stress the user's system further.

AutoCAD 2014: Now we are crossing into truly modernized versions of AutoCAD. This version in particular had major improvements on the command line, like autocorrect, that were sorely needed. The users were also able to multitask better with fast tab switching. Somehow all that didn't require any more system resources than what it already did.

AutoCAD 2015: Quicker documentation and faster productivity tools were the highlights of this release. The Autodesk 360 Cloud Services became integrated too, with much more streamlined access. This version could run on Windows 8 or 7 only, no earlier.

AutoCAD 2016: This focused on regenerating models automatically, and revision clouds. Some enhancements in Mtext and in the status bar were also noticed. This version needed 4 gigabytes of RAM.

AutoCAD 2017: From this version onwards the subscription became flexible. You could now pick and choose which features you wanted and which you didn't need. Also, AutoCAD now supported PDF files, and miscellaneous performance upgrades. This was the first version of AutoCAD to run on Windows 10, and needed an widescreen monitor.

AutoCAD 2018: The 2018 version of AutoCAD allowed users to easily create, retrieve, and place model views together with the help of automatically sized and scaled layout viewports onto the current layout. It couldn't run on 32-bit systems anymore if using Win10.

AutoCAD 2019: This release specialized further in mechanical and civil designs, and 3D mapping, offering each very customized toolsets. The DWG viewer bundled herewith could run on mobiles and web pages as well. You couldn't accommodate the application on a screen smaller than 1080p, and 8 to 16 GBs of RAM were required for AutoCAD 2019.

AutoCAD 2020: This is the latest version of AutoCAD with exciting new features like industry specific toolsets and improved workflow. They also threw in the new Blocks palette which makes a designer's life much easier. In terms of system requirements, it's pretty much the same as the 2019 version. 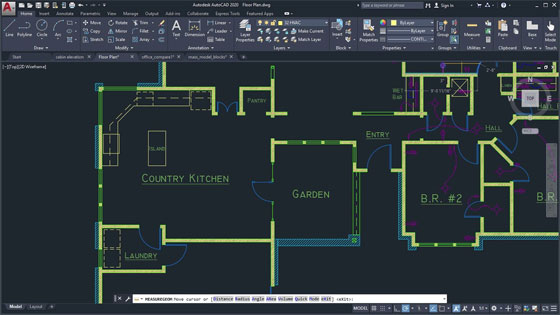