There has been a considerable increase in the popularity of building information modeling, or BIM for short, over the past few years because it simplifies the creation of tedious AEC projects. It has been possible to virtually process imaginative and sizable plans for high-profile projects using the visualization and documentation techniques used in BIM in the past decade.

The following projects will illustrate some of these features, so let's take a closer look at them:-

Shanghai Tower's distinctive shape was influenced by the historical growth of China as a nation. The spiral shape serves as a metaphor for it. The skyscraper is also East Asia's most important financial hub. This design won an extensive design competition, and the architects are Gensler Company.

The Shanghai Tower building project, which involved thousands of workers, was led using BIM. More than 30 consulting firms were hired by the project for design, structural, MEP, and fire safety.

As part of this project, dozens of professionals were contracted to assist with the foundation phases and machinery that was required. In order to accomplish the goal of BIM, such a large pool of human resources had to be brought under one umbrella. As a result, BIM played a crucial role in ensuring that this project was completed on time and within the budget set by the project manager.

Turner Construction Company developed and built the central utility plant for the airport. The plant, a more than 8000 square-foot facility, required architectural improvements, increased room, and extensive MEP expert engagement to guarantee the plant operates with little disturbance. The effectiveness of this facility was crucial to the operation of the airport.

Thus, the best solution for the HVAC network of the plant which was intricate, large, and of great complexity, was to use BIM as the solution. There was a vast pool of consultants that had to be included in the set-up of this incredibly meticulous project, much like the Shanghai Tower, in order for it to be executed successfully.

The site's restricted space and increased built-up area requirements presented this tower's designers with their biggest architectural challenge. The project's size necessitated the pooling of several human resources under a single umbrella of coordination, and BIM suited this goal.

BIM was able to transform the parametric design procedures employed by the architects to create built products. The firm, Permasteelisa, formed a cooperation with Autodesk to use the architectural design all the way through construction.

Considering progressive floor plate area with higher stories as the notion and customizable elements as the subject, BIM usage for precise tracking of the tower's 3D growth proved necessary.

The WeWork company was founded in 2010 and provides shared workspaces, a network of people, and services for gig economy employees such as freelancers, startups, and small businesses. BIM's spatial design iterative features and tools for interior space planning of the interior come in handy here since WeWork is a company that has been repurposing its workspaces according to its animated demands. BIM also has its own iterative spatial design features.

The WeWork workspace documentation uses Scan To BIM features, where the point clouds contained in the cloud contain rich 3D data that can be used for many different purposes. As a result, all the iterations followed according to the plan, resulting in the desired outcome.

With its vibrant and animated spaces, WeWork keeps repurposing its workspaces according to the changing demands of its customers and falling under the large-scale interior and spatial planning themes.

A significant urban infrastructure project that crosses many neighborhoods is the Crossrail project in London. As a result, each component of the project becomes a mini-project in and of itself.

All of these departments working together will result in a significant volume of paperwork, drawings, instructions, etc. that will need to be handled by numerous subcontractors. Therefore, it's critical to keep an eye on how accurate the data is and how the prices are growing. The Crossrail project was also a trailblazer as the first piece of public infrastructure to implement the BIM lifestyle idea.

There aren't too many bridges that can match Randselva Bridge when it comes to their technical prowess and structural prowess. A concrete box girder bridge with more than 600 meters of length, Randselva Bru, is built within a few kilometers of the Norwegian capital, Oslo. In order to construct the complex geometry of the bridge, the balance-cantilever method was used.

A BIM model further illustrated the technical complexity of this project by allowing the design team from four different locations to collaborate on the design of this bridge. Over 200,000 rebars and 250 post-tensioning cables are used in it, and BIM's parametric capabilities were crucial in designing 70% of the structure.

A business complex with several uses is located in the heart of Bangkok. The clients had the idea that the project would serve as a model for a sizable yet environmentally friendly developed complex.

The project's goal was to turn a 17-acre urban plot into a model for a smart city by making sure sustainable practices are used throughout the whole process, from design to building to operation and maintenance. 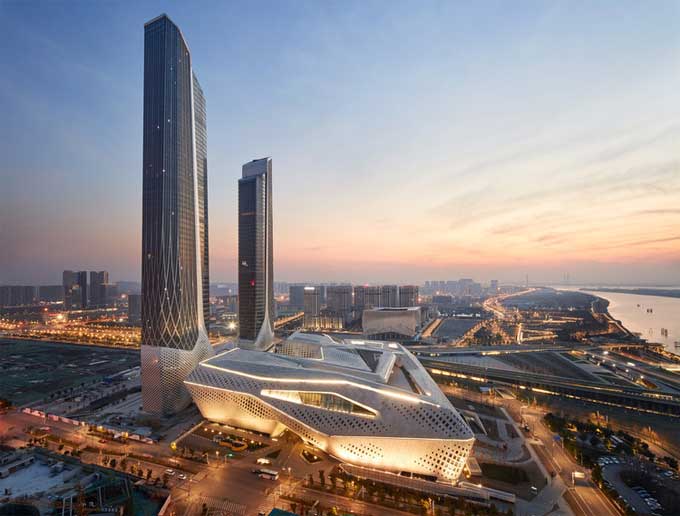