Building Information Modeling, or BIM in short, is the way to efficiently design and quantity estimate a building. It is particularly useful in case of large or complicated structures. Such a building is the Tianjin Chow Tai Fook Financial Centre in China, and today we will discuss how BIM workflows impacted the magnificent building construction.

The benefits of fully integrated BIM workflows are officially displayed with the Tianjin Chow Tai Fook financial center that has just finished in China. Skidmore, Owings, and Merril (SOM), Ronald Lu & Partners, and East China Architecture Design and Research Institute (ECADI) recently completed the skyscraper of 1,738 feet in China, making the use of impressive BIM (Building Information Modeling) for design and project implementation.

After completion, the Tianjin Chow Tai Fook Financial Centre became the seventh tallest building in the world and the third highest in China. It is a beautiful slender structure, worthy of admiration, and clearly dominates the city skyline by day or night.

The parties involved in the design and construction of the tower have spoken openly about the impressive efficiency they attribute to their BIM workflow, showing how BIM significantly reduces the time and cost of the tower construction and plays an important role in optimizing it, optimizing the clear winding glass curtain wall.

"At the beginning of the construction process for the Tianjin Chow Tai Fook financial center, experts estimate that at least 1,308 independent asymmetrical insulation units (igus) will be needed for unique curtain wall structures, which are formed by eight irregular intersections. Curved surface," an RLP spokesperson said in a press release. "However, after conducting BIM analysis and using recurrent data modeling, the number of independent igus needed for the central curtain wall is reduced to 476 - a decrease of more than 60%."

As a result of this complex BIM analysis, this project was completed four months before. This is one of the many examples where BIM workflows have achieved much greater efficiency than it could have been in the traditional, CAD-driven manually handled workflow. BIM is all about collaboration, and it worked out beautifully in this particular case.

The RLP spokesperson added, "When technology has evolved, various BIM advantages in terms of coordination of construction schedules, clash detection, spatial relations, geospatial information, the number and properties of building components, and many other factors have become clearer and more necessary."

The highest building in the north of the Yangtze River in China, the center consists of four levels of the basement and five podium levels, topped by a tower of 103 floors. This center includes the K11 Shopping Mall, Atelier K11 office, and five-star hotels and service apartments.

This center has been recognized as one of the most complicated skyscraper designs and structural systems that have been designed in this country, combining flexibility and stiffness to fight wind effects and seismic activities. This is greatly useful since the area where the Tianjin Chow Tai Fook Financial Centre is located has experienced some earthquakes in the past.

"The design of traditional buildings is mostly dependent on two-dimensional technical images; BIM expanded this design into a three-dimensional geometry," said RLP in press releases.

"When technology has evolved, various BIM advantages in terms of coordination of construction schedules, clash detection, spatial relations, geospatial information, the number and properties of building components, and many other factors have become clearer and more necessary."

As was well expected, the Tianjin Fook Financial Center has won several awards, including the highest honor recognized by the Kingdom of Chartered Surveyors' Awards 20020, as well as other international awards including the Platinum Award Alliance of BIM China and Gold Award Steel Structure on the Internet Annual Introduction to Construction of the Metal Structure of the Annual Association. 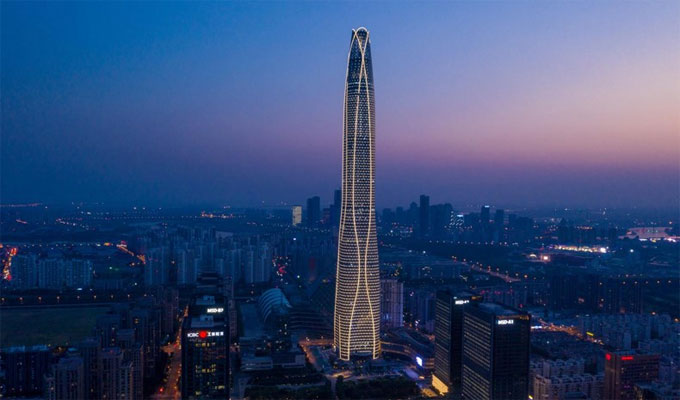