You've probably used Blender if you've ever done 3D modeling, sculpting, animation, or rigging. The program offers a wide range of features, but that does not make it perfect.

We now have SketchUp to look at. SketchUp might be a better option if you use Blender for architectural design or 3D modeling.

As with Blender, SketchUp offers numerous tools to optimize your building designs as well as the ability to design buildings and environments quickly. SketchUp has features that can be useful for making sustainable building designs and calculating building costs.

Blender can also be used for 3D printing, but it's not its primary use case. Although Blender lets you make 3D printables easily, and thanks to its wide range of features and functionality, it does an impressive job both, but isn't built with either at its core.

In the next section, we have Bforartists. Because Bforartists is a fork of Blender, you can consider it the most directly equivalent tool on the list.

You can freely switch between Blender and Bforartists because it updates as Blender does. It's easy to switch projects between Bforartists and Blender at any time, so there's little to lose by trying it out.

UI is the main difference between the two. While the tools are identical, Bforartists' interface is simpler to use and more streamlined.

There is less emphasis here on hotkeys and more on menu navigation and mouse control, which can be useful if you're just getting started or are more comfortable with using the mouse rather than the keyboard.

Moreover, Bforartists has a comprehensive manual that contains all necessary information. Bforartists' manual focuses on the tools themselves and a structure that is easier to understand than Blender's.

You will likely find Daz 3D to be the best option if you want to create and customize human models in 3D. With Daz 3D, you can model, alter, and perfect human models to your specifications, as opposed to Blender.

It is ideal to use Daz 3D as your main 3D modeling tool while using another, different animation tool for the rest. You can export assets from Daz 3D to most commonly used workspaces, including Blender.

There's no contest between Daz3D and Blender when it comes to ease and simplicity of human 3D model creation. Therefore, Blender is the clear choice if you want to accomplish anything else.

You may have first used Blender because of its VFX tools. It is worth taking a closer look at Houdini if you are looking for a solution suited to the filmmaking, game development, and motion graphics industries.

Houdini is also very capable with its 3D modeling and animation tools, using a node-based approach to simplify the animation process behind the scenes.

VFX and simulation tools are where Houdini excels over Blender. Houdini is the best tool for making highly realistic particle-based or dynamic simulations on a large scale.

You can create and animate models for all kinds of purposes with Wings 3D, a free and open-source 3D modeling tool.

Unlike Blender, it does not have animation functions. The tool is purely for 3D modeling. Wings 3D is likely not a good alternative if you started using Blender to use its animation, rigging, or motion pathing tools.

Wings 3D is an excellent choice if you're looking for an easy-to-use, powerful 3D modeler that can replace Blender. You can access context menus with just a right-click on the interface, which is simple and easy to grasp.

However, Wings 3D's AutoUV facility is the best thing it has going for it. To better paint and texture a model's surface, you can use this tool to cut and unfold an image. The Wings 3D AutoUV tool might just offer better results than Blender's similar tool. 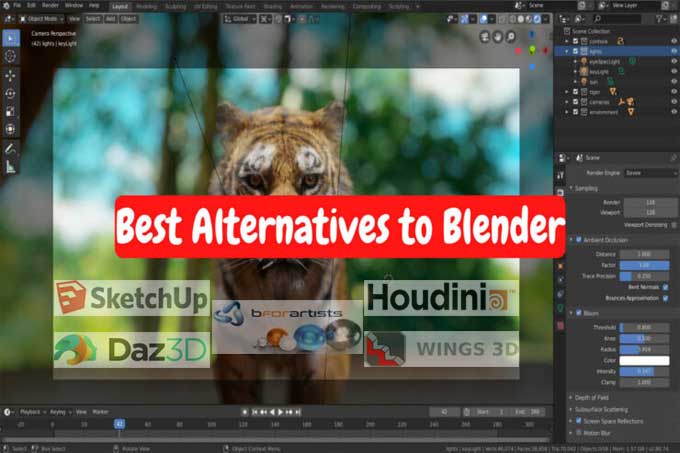