The truth is, getting Fusion 360 for free won't cut it. You will have to pay some cash. In the end, it's a product for designers and makers. Fusion 360 offers versions that allow you to test the software out or even use it, depending on your circumstances and status.

Students and educators can download Fusion 360 for free. The free, full Fusion 360 software is available to hobbyists and small businesses. Hobbyists, free usage of Fusion 360 is only for noncommercial purposes. Fusion 360 comes with a free trial version that lets users test out the software before locking themselves into a license.

1. It is an Autodesk product that is designed to be professional 3D CAD software. The usability of this CAD program is better than that of other professional solid-body 3D modeling software. Nevertheless, it covers every step of designing, testing, and executing a 3D model.

2. This tool offers powerful parametric and analytic mesh tools that are well-suited to the majority of industrial design tasks. In addition, the program is capable of simulating both the construction of the components designed and their use under stressful conditions.

3. Fusion 360 supports 3D printing exceptionally well, as might be expected. Autodesk Printing Studio allows you to import CAD files directly. An educational license allows you to use Fusion 360 even though it is a commercial program.

4. Design tools are part of Fusion 360's impressive versatility. There are tools to model surfaces that are suitable for 3D printing as well as comprehensive surface modeling tools.

5. In addition to its sophisticated collaborative features, Fusion 360 stands out from the crowd. Engineering or design work can present live to stakeholders or project participants who aren't physically present. To view the textured 3D model, reviewers paste the link into their browser.

6. Whenever you pan and zoom in on your design, your reviewers will see it. The Fusion 360 tools can also be used while in a browser by one of the users.

7. It supports cloud-based file sharing, version control, and import & export CAD file formats as you would expect from any modern 3D CAD software.

You can try the full version of this software using the trial version. Consequently, if you want to see how Fusion 360 operates for a particular workflow or find out how applicable an application is, this would be an optimal way to try it out. If you plan to switch to another version, don't become too dependent on it, as it is only available for 30 days.

As a hobbyist, you can obtain a free license for Autodesk Fusion if you intend to use the software for your projects. Personal licenses are limited to a single user and Fusion 360 can only use for non-commercial purposes.

Personal licenses give you access to most of the features, but they come with several limitations. File types can't be imported and exported in as many formats, and some workflows are restricted. Also, the cloud features will not be available to you. Renewal of the license occurs annually.

In the workshop or to participate in hobbies, Fusion is intended for users interested in using it. Despite the lack of high-end features and rendering options, designing for 3D printing and simple CNC work still works.

You can run the free educational version of Autodesk on up to three personal devices as long as you meet the requirements. Additionally, they have a Chrome-book cloud version. Students and educators can use these versions.

Including full access to all features, including cloud, Fusion 360's student version is exactly like the full version. That is an excellent opportunity for students interested in enhancing their school projects and learning valuable CAD skills.

For those with educational licenses, there is a cloud version of Fusion 360 runs directly from Chrome-books. However, it provides another option for those on a budget who cannot afford a high-spec computer because its features are less extensive and requires internet access.

Additionally, Fusion 360 comes with several free applications that allow users to take full advantage of cloud-based collaboration. Both Android and IOS versions of these apps are available. Free Fusion 360 apps focus on different aspects of the main program. The project partners may then utilize the tools they are most comfortable with.

Several cloud features are included in all Fusion 360 versions, including cloud rendering, analysis, and simulation. A cloud credit is used to purchase these features, which allow users to buy cloud renders and simulations. Credits are a simple and pay-as-you-go method to access the extended tools from Autodesk and are a way to limit the load on the Autodesk servers.

Fusion 360 will also give you cloud access to other Autodesk software that you can't afford if your credit runs out, so you don't have to go out of your way to learn it. You can share files between devices and collaborate with your team members using free cloud features. 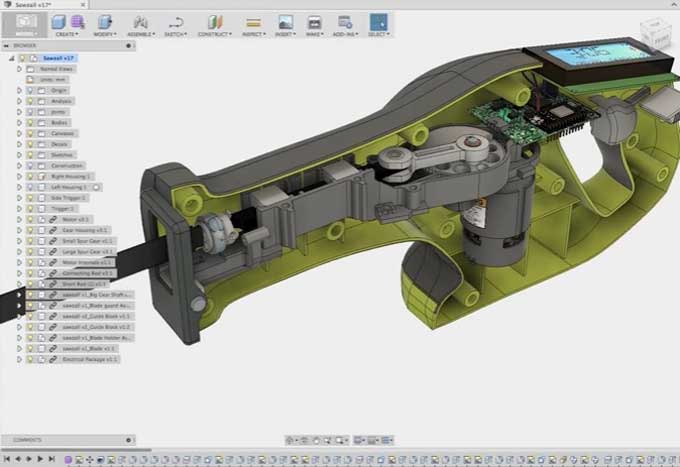