Lumion vs Enscape: Which is the best 3D software to use in 2022?

It is now possible for designers & architects to bring their ideas and concepts to life with the help of 3D software, making the process of bringing the concepts to life much easier. Our focus today will be on two of the well-known software packages that are used in the construction industry which are namely Enscape & Lumion.

Lumion as a software

This software is used to render architectural images, video clips, animations, and panoramic photographs using the Lumion architectural rendering engine. The architecture and design industry has been very enthusiastic about this software since it was released in 2010 and it has gained a great deal of popularity since then.

It has also been developed a lot in the past couple of years due to the introduction of many new features and tools that are offered to the users with each new version.

Enscape as a software

The Enscape application enables Revit, Sketchup, Rhino, Archicad, and Vectorworks designers to visualize their plans realistically and in real-time. It allows users to preview and explore their projects directly in the modelling tool, which allows them to concentrate on the creation, design, and construction of their projects. Rendering with this particular software has become a standard in the industry, and it produces rendered images of professional quality.

Features and the differences between these software

Moreover, Lumion has been designed to accommodate a wide range of customizing choices for picture resolution, and it also offers a wide range of visual effects such as realistic images, more light, wind, rainfall, and night effects that can be applied to interiors and exteriors.

The rendering time will vary depending on the configuration of the computer, the length of the video, and the amount of detail in the images. It is possible to render an image in less than a minute, and it is possible to render an animation in a couple of hours. In Lumion there is also a panorama mode that can be used for taking panoramic pictures and it is mostly used for urban projects.

As opposed to Enscape, which renders nice and realistic pictures in a matter of seconds, it is also free. In order to make the work of designers and architects easier, the plugins can be integrated with several types of 3D software.

The 3D render will take a few seconds to a minute to finish when Enscape users set up all the different textures and add the scene assets, and we will be able to see the good result as soon as the render is complete. As we can see in the image below, before Enscape renders anything, we have the choice of selecting one of four different modes, the default mode, the white mode, the polystyrol mode, or the light mode.

The usability and Setup

There is no doubt that both of these software programs are fairly simple to use and learn. From the choice of the environment to adding the needed objects (tree, plants, humans, etc.) to edit the material of the object and the environment (sky, sun, cloud), the tools and commands are arranged from the beginning to the end.

Unlike a lot of the other plugins and add-ons that are available, Enscape comes with only a small number of commands and tools, which also makes it very simple and easy to use, so there is no need for extensive configuration.

The user interface of the applications

In Lumion, you will find an interface that is very easy to use. It does not contain a lot of tools, all of the tools of Lumion are linked together to provide a very organized and easy way of working.

Enscape's interface is quite similar to that of Enscape, and the working tools are so intuitive and easy to use that any novice can use it with ease.

The Enscape program has been improving with each update, just as Lumion has. The software's interface has navigation controls by default, so users are familiar with it when they use it for the first time.

The quality of Lumion's renders and the features it offers make it a powerful and heavy software, which is why it requires a high-performance computer with the best graphic card and strong memory.

To prevent overheating of the CPU and GPU card, it is recommended to use a desktop computer with a good ventilation system. There is no MAC version of Lumion, it is only available on Windows.

On the other hand, Enscape requires a powerful computer configuration with an external graphic card and a powerful processor. It is best to use a faster computer if you are looking for better results quickly. There is no MAC version of Enscape yet, and it is only available for Windows. 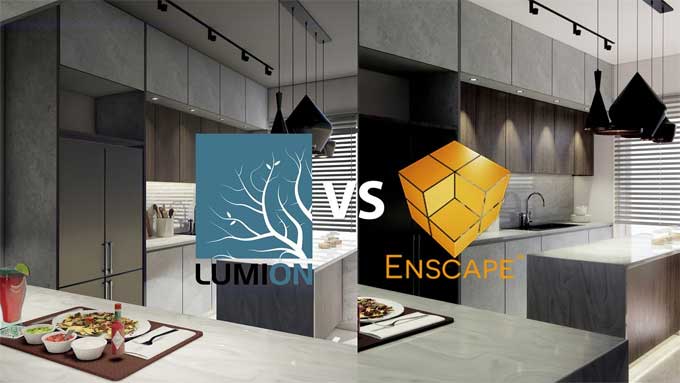