Amazing latest features for MEP in Revit in 2023

Using Revit 2023, you will have access to capabilities covering all phases of the mechanical and electrical design workflow, from conceptual design and analysis to production and documentation of design deliverables, as well as enhanced features to help with detailed construction design.

As a result of these enhancements, construction deliverables, such as models, are employed as part of the design process, as well as analysis as the foundation for design.

A substantial number of votes were received on the Revit Idea Station regarding BIM practitioners' quality of life concerns.

Here are the new features included in the 2023 Revit update:

In the most recent version of Revit for MEP for 2023, a new early-stage design process has been introduced for electrical engineers and designers.

This framework is conceptually similar to that available to mechanical engineers under the Systems Analysis Framework. Engineers manage information in fewer locations than in conventional processes.

By using this new method, Revit will be able to handle important data about electrical loads and distributions without having to physically model anything.

This new workflow provides a BIM-centric approach to starting electrical power distribution design workflows in the future, with the possibility of linking these processes to downstream workflows.

There has long been a major pain issue with the lack of consideration of phasing in the design of coupled MEP networks, particularly those that are linked.

The removal of a part over time has created two primary issues, and this has prompted one of the most popular MEP-specific thoughts on Revit Idea Station. The two primary issues for any MEP engineers are as mentioned below:-

1. Elements losing their system association,
Elements are no longer connected to adjacent elements.

In addition, elements that are destroyed keep their connectedness to nearby elements, facilitating common modification actions.

As the need to measure and reduce Building Energy Use and Carbon Emissions only grows and while Next Gen Insight is still in development we made a number of foundational improvements to Revit’s Energy Analytical Model.

While the main focus of these improvements relates to Accuracy, Precision, and Performance, we started this by essentially refactoring key components originally written many years ago.

It not only improves Revit's processing speed by 3X and removes memory limitations for very large models in Revit 2023, but also provides a better foundation for more improvements in the future.

Another two items that were highly rated on the MEP Idea Station pertain to the improvement of being able to annotate elevations of MEP segments.

As well as improving the mechanical and electrical design, the improvement addresses detailed fabrication elements. Prior to this, elevations of elements like pipes and conduits were always reported relative to their reference level.

It now enables you to define tags that are associated with levels, project base points, or survey points, depending on the situation. Furthermore, we improved the built-in parameters to provide a great deal more flexibility when annotating straight segments of MEP systems.

The behavior of holes was somewhat unpredictable before this improvement, and proper support for holes wasn't uniform across patterns.

There are some cases in which holes do not develop even if they are configured in a manner to do so, while there are other cases in which holes develop at incorrect locations, resulting in manual 2D modifications to the development of ducts, disrupting manufacturing operations in the process.

The latest release of Revit 2023 introduces enhancements to the creation and editing of detailed mechanical models, making it easier to create models that are accurate and ready to install, and it is particularly useful for dealing with sloped piping systems, which are complicated. 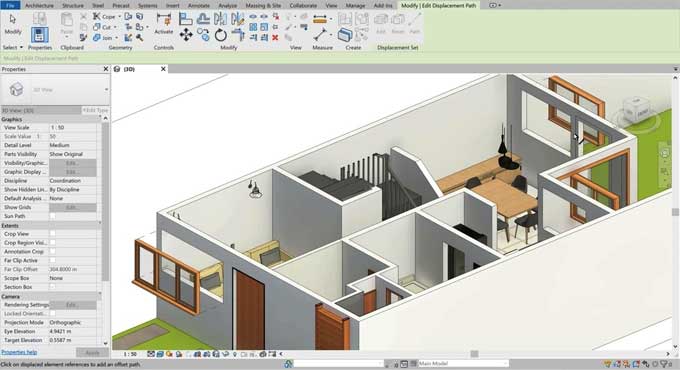