Some useful tips to draw front elevation in AutoCAD

In this autocad video tutorial, you will learn some useful tips to draw front elevation of any building.

As soon as a 2D elevation is created, the object produced is a 2D Section/Elevation object. Both 2D sections and elevations contain the equivalent object type and style.

The visibility, layer, color, linetype, lineweight, and linetype scale of every elements can be easily managed. It is also possible to assign a material like a brick or concrete hatch, to individual components of the object or the style. Furthermore, you can use linework editing commands to assign lines in a 2D elevation to several display elements, and combine geometry into a 2D elevation. The users can dimension 2D elevations.

3D Elevations: 3D elevations are produced by drawing an elevation line in front of a number of objects and then generating a 3D isometric elevation object out of them. The styles are not employed in 3D elevations.

The display of subdivisions inside 3D elevations can be managed easily. With the use of the Hidden Line Projection command, the users can generate 2D hidden line projections of any view of the 3D elevation that can be exploded and edited or hatched.

To learn the tricks to draw front elevations in AutoCAD easily, go through the following video tutorial. 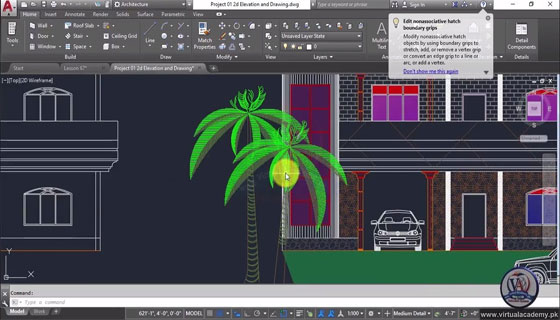