Vectary is a 3D modeling software developed by a Slovak company in 2014 for 3D printing and Augmented Reality applications. Designers and enthusiasts can design complex shapes with ease using the simple software provided. It is free and available to everyone as a cloud-based solution. Thousands of professionals, makers and beginners use it daily. There is also a paid version with more features for those who want to take their modeling further.

The 3D models built by Vectary calculate automatically using parametric plug-ins, which are parametric models. As the founders themselves are designers, the platform makes it easy for anyone without previous experience to design complex models using templates they can edit.

Vectary has become accessible to the general public after previously being available only to a limited number of people. No installation or configuration is necessary to use this program. It can access online and files stored in the cloud. There is also a large library of free 3D models available for download.

The option to download models from a hard drive is also available for those who wish to do so. Three-dimensional objects are created by adding shapes, materials, and textures to the original image. That allows for the creation of new ones quite easily.

Photon is Vectary's integrated system for rendering photorealistic images. It's important to note that Photon requires that a plug-in install for it to work.

It's a function you won't always be able to use if you're switching computers or on the go, but it's useful if you want quick, high-quality renders without the hassle of endless exporting and importing.

Using its cloud-based computing, Vectary launches real-time rendering with the click of a hotkey. The image will adjust before your eyes instead of having to wait for a rendering to create.

In Vectary, you can find a library of free models, materials, and environments similar to SketchUp's. Although this library is similar to SketchUp's, it is different from it. Although there are real-world assets in Vectary, it features more artistic models. It's easy to see that these assets are more suited to artistic purposes than typical CAD work; they can be a good source for your next design.

By integrating Vectary Web AR into its browser, the company entered Augmented Reality in 2019. With this tool, immersive experiences and augmented reality content can publish on any website.

Vectary is another browser-based CAD application. Unlike other free versions of professional software, Vectary offers a free version that is easy to access. It isn't a package that goes with engineering, architectural, or product design applications. However, despite it being powerful software that fulfills some unique CAD needs, Vectary has many differences that may make it inefficient for some advanced users.

Vectary is the only one that can use commercially. That is a great argument for using this software over other more traditional CAD programs. It offers file export as OBJ or STL for 25 projects you store online for free. Exporting and re-importing projects later can open some space, but they do not keep their parametric goodness. 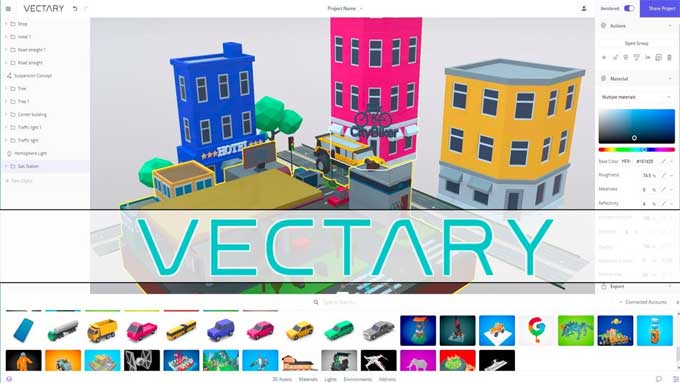